So a quick post for Father’s Day about the Great Train Robbery.

I was 14 when the Great Train Robbery took place in 1963. It was sort of the way things were in another time. Crime was different, maybe it was because security was non-existent, armed robberies of wages offices on a Friday, when wage packets were being made up, were commonplace. Safes were ‘cracked’, doors were ‘jemmied’ and policemen called criminals ‘chummy’ (well they did in Dixon of Dock Green).

All I remember is thinking how did the police find them all so quickly? Well they left their fingerprints all over their hideout. Ocean’s Eleven they weren’t.

One of the robbers was Ronnie Biggs, a career criminal from South London. He was sentenced to 30 years in prison and served 15 months before escaping from Wandsworth Prison. He eventually ended up in Brazil for 31 years before voluntarily returning to the UK in 2001 because of ill health. He continued his prison sentence and became very ill. Release was consistently denied on compassionate grounds (because he was unrepentant) until eventually he was released in 2009, and he died in 2013.

So what’s this to do with Father’s Day? (some may ask)

Well it turned out that my Dad was one of Ronnie Biggs favourite footballers.

The estimable website Arseweb carried an article on Ronnie Biggs in 2001, partly extracted below.

Reading his BBC obituary it looks like in 1952 he was briefly between prison sentences.

I can do without the comments about being an Arsenal supporter is a life sentence thank you. 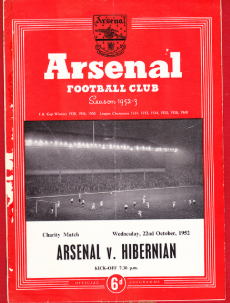